Internet as an application platform - even for HD movie editing?

I have read a lot and also written a bit about web based applications of different sorts and how business models in the software industry are changing. The move to Internet-based applications has been promised for maybe too long, but from my point of view it seems to be going more mainstream lately - which for instance a front page of the Economist in October 2009 indicated.
In addition to moving more mainstream in terms of users, I think web based applications are wideing the scope also in terms of types of applications that move online. The last weeks and months I have been lucky enough to be involved in a project taking this somewhat to the extreme - trying to do HD video editing online in the browser.
With the launch of Flash Player 10.1, Adobe brings hardware accelerated mp4 support to browsers on several operating systems - and based on technology from the Creaza movie editor a preview of a upcoming version of online video editing with HD video support has been made in record time by a dedicated team of developers in Norway and Romania. You can do a test drive yourself, by getting the new flash plugin and following this link to the online video editing application preview. Make sure to use the commenting function to tell us what you think.
The technology preview version does not have a save or export functionality, but you can render the movies live and watch them to test the quality. In the screenshot below I am changing a text about 10 seconds into the example movie. You can also add transitions and effects, and to be honest I was amazed how the results look. You can have multiple layers of effects, sound and video (including multiple videos playing in different parts at the same time) and it all renders on-the-fly. 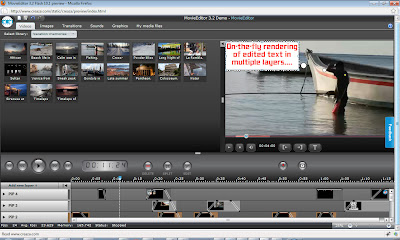 Full disclosure: I am a member of the board at Inspera, who owns a majority stake in Creaza AS and has the IPR to much of the technology used in the preview application.
By PMMonkey at 08:32 2 comments: