Correct, Clay? At least in theory.

In a well-written post titled "What Clayton Christensen got wrong", Ben Thompson uses the iPhone as a proof that the theory supporting the disruption-from-below pattern might be wrong. He puts forward that the faulty claims of Christensen are:

The grouping of his first two items into (1) is intentional and lets me come to my quick response right away:

(1) Non-functional attributes are of course important to buyers, even professional ones[1]. This is kicking in open doors. Just because Clayton Christensen is not good, or at least has missed here, at predicting just how important they can be, it does not really make the theory wrong. Brand counts. Feeling counts. (And why touching the iPad 1 screen still feels superior to the very newest Android tablet is a mystery to me, but that is a side track!) I'm no expert of rational choice theory, but accounting for these non-functional attributes does not make it less rational in my use of the word - and if the theory is to have any use modelling consumer behaviour, for sure such non-functional elements must be factored in as attributes in some way. If not, it would be useless for this purpose.

(2) The good-enough-curve[2] for mobile phones, a product with usage patterns very personal and frequent, might be pretty high. So iPhones may still not over-serve their customers as much as Clayton Christensen thought they would in the interviews mentioned, thus the theory as such can be correct. Maybe the high positioning of the curve is particularly true in countries with strong buying power, but another piece of anecdotal evidence pointing to the same being the case for developing countries is how smartphone penetration is increasing there (not yet so much for iPhones, but relatively speaking $100 Android devices are also put pretty high on the list to make the cut for many of their recent purchasers!).

I've heard Clay Christensen speak on the topic a couple of times (a long time ago, but I still recall it with joy), and he does not really claim this is the only pattern of paradigm shifts - which means it cannot really be proved wrong by providing counter-examples as such, if it still accurately describes (and maybe even predicts) others.

It is very useful to point out, as I tried to do to the students in my Entrepreneurship class today - leading to one of the students reading Ben Thompson's piece with plenty of great references, that it cannot be used as a simple acid test for new ventures. It does not have to be a disruptive innovation to succeed - and planning to disrupt an industry segment is easier than doing it anyway. Thinking about it is still useful for positioning the product and learning which segments will appreciate your value proposition.

In my opinion it is bold to claim at this point that Apple will never fall into the trap of marginalizing their real market over time, by only focusing on the top end. In some of the old examples in The Innovator's Dilemma, there were "genius CEOs" (and they were, at the time!) focusing on the high end of the market for improved profits. Of course right now, with 5Ss and 5Cs flying out of stores of the rate of 9 million over one weekend (AAPL stock price was up the day of this blog post because of this), it seems Apple is far from in that situation just yet.

[1] - The claim that professional buyers are extremely rational might be about as misleading as saying consumers are not. It all depends what you measure into that value. What is the value of the McKinsey brand for a strategy project and is not some of that irrational and/or unconscious? Why does Coke taste better than the white label variant sold as as a store chain's private label, even though they cannot be separated in blind tests?

[2] - I'll borrow Clayton Christensen's own illustration of this from a guest lecture at MIT Sloan back in 2007: 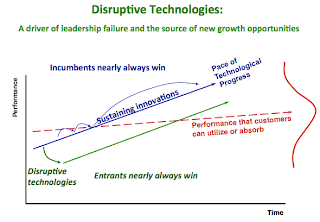 What I called the "good-enough-curve" is that dotted red line of average consumer performance utilization of a product.