Getting the heck out of the office


When teaching Entrepreneurship at NITH this semester, I am leaning quite heavily on Steve Blank's book The Startup Owner's manual (as a supplement to Business Model Generation by Alex Osterwalder, that is our main course book in addition to articles etc.).

One of the key phrases I particularly like in Steve's book, in addition to the definition of a startup as a temporary organization searching for a scalable business model, is the advice to get the heck out of the office (there are no facts or customers in there!).

Even if "the office" might be a metaphor for many startups, there are no subsititutes for actually testing hypotheses on customers.

So do I practice what I preach? Well, I try to - with tapbookauthor.com (and Norwegian variant epekebok.no) now up in low-fi version 0.5 to start describing our awesome app publishing/authoring tool, we are ready to get the first set of post-pilot customers! Next week we are demoing for potential customers and starting discussions with seed investors - getting (the h***!) out of the office...
By PMMonkey at 12:48 1 comment:

WeVideo named one of the most exciting startups in Norway

I just picked up that WeVideo was named #1 (or at least first mentioned among top 10!) of the most exciting startups in Oslo. So it seems you can be a prophet in your own land after all?

As a matter of fact: In two weeks I will travel to work a few days on site in Palo Alto (I help WeVideo a bit as a consultant). After about 15 years working with the software and business in various forms, I am finally heading towards software Mecca to actually work (study trips and vacations does not count!). Looking forward to it.

The current process in WeVideo is to become more independent of mother company Inspera. With the HQ now in Palo Alto, even if I am sure they are even more exciting at this time next year, that might be the reason if they are not in the list then. Anyway, it is buzzing with activity both in Oslo, Timisoara (Romania) and Palo Alto these days, so keep watching the company for news to come the next few months as well.


Sometimes the only ones enthusiastic about methodology sit on the vendor side. What do you do if you get that 1000-yards-stare back when you mention "agile" or even try selling the idea of using "Scrum"? For sure you don't start talking in detail about building product backlogs and items making it into a future sprint backlog!

What I have found may work in such settings, though, is introducing the concept of a wish list and some very simple rules to govern it. YMMV, of course, but something along the lines of:

- Every suggestion or idea, no matter how great, goes into the wish list right away
- At certain points the wish list is reviewed and the highest value items are scoped for delivery

Of course there is the risk of being perceived as a stubborn bastard, but maintaining such a wish list can help you structure a "backlogish" approach even where no-one wants to hear about it and it can be good for business (on both sides, actually -- as it makes priorities clear) and often separates what is included from what is paid for. Give it a try.
By PMMonkey at 13:11 1 comment:

WeVideo just raised $19M from a venture capital firm. Knowing these VC guys are not playing the 50% increase game, this certainly raised the bar for WeVideo - I guess to be a real success now by their definitions, we are talking $250M+ valuation or so... Crazy. And crazy exciting. I do of course know that the reason for such multiples is that the likelihood of going to a $0 valuation is also very real. Any way you put it, this is a huge compliment to the team lead by Bjørn and Jostein and a great opportunity to take a real shot at being and staying number one video editor in the cloud.

Just after the news about the funding, WeVideo announced their extended partnership with Google (they are already on YouTube.com/create) and that WeVideo was compatible with Google Drive from launch day. And this week, Disney launched their Avengers Remix campaign powered by WeVideo. And not long before that, WeVideo launched their first mobile app that seemlessly let you add clips from a mobile device into a collaborative video project. Busy bees indeed.

And a last quick note: This week a book co-authored by Andreas Goeldi, who I went to MIT Sloan with, came out; Video Marketing for Dummies. Reportedly he says about WeVideo that it is "Likely the closest thing to a full-blown video editing application in the cloud". Couldn't agree more!

Full disclosure: I am not exactly neutral to WeVideo. I am a member of the board of Inspera, the company that developed the technology in WeVideo and spun it off as a separate company. That being said, my very tiny stock ownership in Inspera (that is now a minority shareholder in WeVideo) is not likely to make me truly rich, even if the ball flies totally out of the park. But rich on experiences for sure! Through my company Innovation Consulting I am playing a modest role in making WeVideo tick and appreciate both the forward looking days and the more firefighting-style we might have from time to time in the run-up to a big launch.
By PMMonkey at 10:28 1 comment: 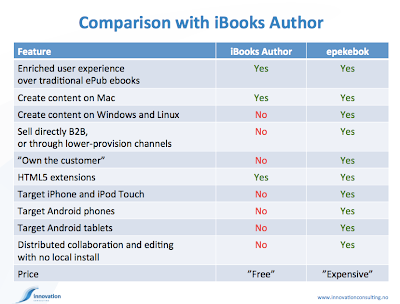 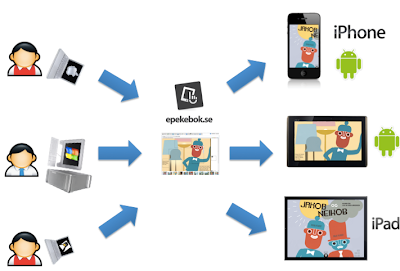